Launch of the Foundation for Humanity’s Adulthood’s website — now known as the World Transformation Movement (WTM) — by one of the world’s leading biologists, Professor Charles Birch, at the Australian Museum on 16 October 1998. 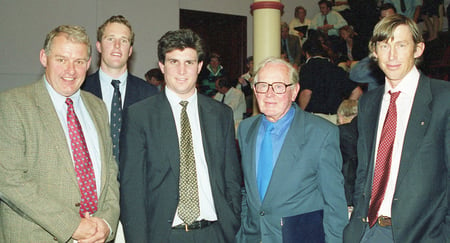 Professor Charles Birch (1918-2009), Emeritus Professor at the University of Sydney and Challis Professor of Biology for 25 years. He was awarded the Templeton Prize for Progress in Religion in 1990, a prize considered to be ‘the equivalent of the Nobel Prize for religion’ and awarded for ‘increasing man’s understanding of God’. Professor Birch was described as ‘Australia’s leading thinker on science and God’ (SMH 27 Feb. 1998).

In 1991 Professor Birch gave this commendation for Jeremy Griffith’s book Beyond The Human Condition:

‘In his book Beyond The Human Condition Jeremy Griffith makes the right emphasis when he identifies the order of the universe and its cosmic and biological evolution as the issue that brings science and religion together. Science shows an increasing complexity in order with cosmic and biological evolution but it finds no meaning to that increase in complexity. Jeremy Griffith finds that a religious vision brings an “integrative meaning” to that order. Moreover it leads him to an ethical vision of integrating love and peace. In all this he gives us a genuinely original and inspiring way of understanding ourselves and our place in the universe. His vision is one I embrace with enthusiasm and commend to all those who are searching for meaning.’

The FHA’s website was launched to a capacity audience at the Australian Museum on the evening of 16 October 1998. Transcripts of the speeches given that evening by Jeremy Griffith and Professor Charles Birch can be accessed by clicking on the relevant name below. Other speakers on the night were: Tim Macartney-Snape AM OAM, a biologist, mountaineer, twice honoured Order of Australia recipient and a founding director of the FHA; John Biggs, a Member of the FHA and a solicitor; and Sam Belfield, a Member of the FHA, the Executive Officer of the FHA (at the time) and an honours graduate in Rural Science.

Professor Birch then spoke on the ‘The nature of holistic science and the need for social tolerance in considering such matters.’