FREEDOM:
The End Of The Human Condition

At last, the redeeming, reconciling and rehabilitating biological explanation of the human condition that brings about the dreamed of dawn of understanding and ends all the suffering and conflict on Earth 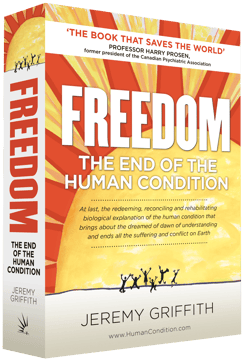 FREEDOM: The End Of The Human Condition is the definitive presentation of Australian biologist Jeremy Griffith’s breakthrough biological explanation of the human condition needed for the complete understanding of human behaviour and the ultimate amelioration of all the underlying psychosis in human life.

Professor Harry Prosen, former president of the Canadian Psychiatric Association, has said: “This book of books, indeed this greatest of all books, effectively takes humanity from a state of bewilderment about the nature of human existence to a state of profound understanding of our lives. It is a case of having got all the truth up in one go! I believe this is the most sensational information to ever appear on planet Earth.”

And Professor Scott Churchill, Professor and Founding Graduate Program Director, Psychology Department, University of Dallas, has said: “Nothing Dr. Prosen has said about the immense importance of this book is an exaggeration. This is the book that all humans need to read for our collective wellbeing.” Read Churchill's full review.

FREEDOM was launched at the Royal Geographical Society in London in June 2016, where Sir Bob Geldof — who was essentially knighted for his concern for humanity — began proceedings by pleading for scientists like Jeremy to save the world. Jeremy then presented that desperately needed scientific solution to the world’s problems, which is the reconciling explanation of our species’ ‘good and evil’ conflicted human condition. (See details and video of the launch and subsequent publicity here.)

Need help? To guarantee optimal layout and functionality we recommend you view the PDF using the current version of Adobe Reader. For more in-depth help, see our PDF Help and Troubleshooting.

Get your copy of FREEDOM: The End Of The Human Condition

While FREEDOM and Transform Your Life And Save The World are available in bookstores, including Amazon, due to their world-saving importance they will ALWAYS remain freely available here.