The Launch and Subsequent Publicity of FREEDOM: The End Of The Human Condition

FREEDOM: The End Of The Human Condition – ‘the book that saves the world’ – was launched in London on 2 June 2016 at the Royal Geographical Society (RGS) to an invitation-only audience of reporters and dignitaries. Tim Macartney-Snape (AM OAM), Patron of the World Transformation Movement, introduced the book’s author Jeremy Griffith, and then introduced Sir Bob Geldof (FRGS), who gave the keynote address, before Jeremy presented his biological explanation of the human condition that is contained in his book FREEDOM.

Note, you can read Jeremy’s expanded address, which is presented in the booklet, Transform Your Life And Save The World, here. This booklet forms an ideal introduction to FREEDOM.

To summarise, in his introduction, Tim said that “Sir Bob will speak first about the crisis facing the world after which Jeremy will present the solution to that crisis.” (Watch & read all of Tim’s Introduction here)

Then, most excitingly – and appropriately because he is regarded as the conscience of the world and someone whose concern for humanity is second to none – Sir Bob gave his address, which wonderfully encapsulated this concern as well as his appreciation of where the answers to the world’s problems must come: “I’ve never felt the world more threatening, more fractious, more fissiparous, more febrile, more fucked up than it is now...We need to think, we need new ideas, we need proselytisers, we need obsessed people, which I think Jeremy is. We need him to be questioned. We need FREEDOM to be argued, we need it to be read and talked about and understood...you need someone as committed as Jeremy to trying to understand what gets us here...Never before have we needed genius, magic and power more; and the word I’d add to that is thought and thinking...Jeremy made me think afresh and think differently. I hope he does it with you.” (Watch & read all of Sir Bob’s address here)

Then, Jeremy presented the fully accountable, all-important biological explanation of the human condition. To begin, he acknowledged Tim’s wonderful support in bringing these answers to the world; he then thanked Sir Bob for his extraordinary honesty in recognising the plight of the world, an honesty that Jeremy described as being “like the coming of the summer rains that water the parched Earth!” In summarising his presentation Jeremy said that “All the ailments the world suffers from are symptoms of the deeper issue of the human condition. Which means that to fix the world we have to fix the human condition, and that’s what FREEDOM: The End Of The Human Condition does. It solves the underlying, real issue that’s been crippling the human race.” (As mentioned, you can read Jeremy’s expanded address, which is presented in the booklet, Transform Your Life And Save The World, here. This booklet forms an ideal introduction to FREEDOM.)

The RGS was the most appropriate venue in the world to hold this momentous event because it is where the late Sir Laurens van der Post – the most quoted author in FREEDOM and the inspiration in Jeremy’s life – made his impassioned plea for the explorers of the world to investigate the inner realm of the human condition, a plea that Tim Macartney-Snape played for the audience in his introduction. In his 1990 RGS Television Lecture of the Year, Sir Laurens said, “It’s been said that the explorers in mankind must be singularly unemployed because there’s nothing left in this world to explore. Well of course that depends on what you mean by exploration...in the sense to which exploration is both an exploration into the physical and into the spirit of man there is a lot ahead to do...the future is in your keeping...there is exploration in reverse to do. We must go sharply into reverse...we must rehabilitate ourselves; get our old natural selves to join with our other conscious, wilful, rational, scientific selves…Your job is not over.”

It is precisely this reverse exploration into the human condition that FREEDOM has successfully navigated.

So as these extraordinary presentations demonstrate, we had the right people and the right venue to launch FREEDOM: The End Of The Human Condition — what an historic day for the human race!

Photos From The Launch An extensive advertising campaign was run over the May-June 2016 launch period including large ads in all the major newspapers in the English speaking world, such as the ones below: The New York Times, The Wall Street Journal, The Times (UK) and The Australian. 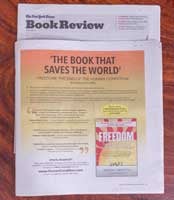 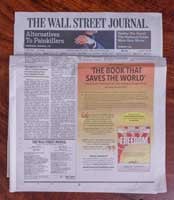 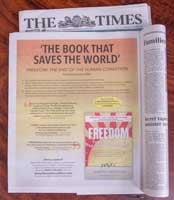 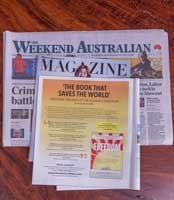 As a result of this major advertising campaign, FREEDOM was downloaded over 30,000 times from our website over May-July 2016, the significance of which will be talked about in the Publicity section directly below.

Due to the critical need the world has for the explanation of the human condition contained in ‘FREEDOM’, a most substantial advertising campaign will announce its May 2016 launch — including:

Very large advertisements in all the major newspapers in the English-speaking world — such as in The Wall Street Journal, The New York Times and USA Today in the US; The Globe and Mail in Canada; The Times, The Telegraph, The Economist and The Spectator in the UK; The Australian and major state newspapers in Australia; and The New Zealand Herald in New Zealand.

Online advertising, with an equally substantial budget to the print campaign, has commenced and will continue into 2017 and beyond.

Scroll left or right to see samples of the advertisements.

Sample Of The Publicity FREEDOM  Is Receiving

As mentioned in the Advertising section above, the major promotional campaign resulted in FREEDOM: The End Of The End Of the Human Condition being downloaded over 30,000 times from our website over the launch period. However, since FREEDOM is introducing a completely new and totally world-changing paradigm of understanding there is a great deal to read, consider and digest, and so it has to be expected that it will take many months and even years for a meaningful appreciation of it to emerge. As Jeremy emphasises in chapter 1:4, there’s also the problem of the ‘deaf effect’, humans’ subconscious fear of discussion of the human condition, which also limits peoples’ ability to access and appreciate FREEDOM. It is, however, the issue of the paradigm shift that is the major problem – FREEDOM basically upends our entire existing framework of knowledge. When the blinds are drawn on the human condition the light inevitably reveals a universe of previously hidden truths – about the relationship between men and women, about the left and right wings of politics, about mechanistic science leading humanity to oblivion, about the nurturing origins of humans’ moral nature and our species’ cooperative, loving past, about the demystification of God and religion, about the differences in levels of innocence between individuals and races, about sex as humans practice it, etc, etc – bringing about a massive future shock. As Bono of the band U2 recently said, “truthfulness will blow things apart”!

Even though this deeper appreciation of FREEDOM will take time, guest articles by Jeremy Griffith have already appeared, such as the following Irish Times article that appeared on 30 May 2016, and the following i-MAGAZINE article that features in the July-December 2016 issue.

A continuing extensive promotion and advertising campaign will ensure an ever-growing appreciation of the extraordinary world-saving truth in FREEDOM. This growing appreciation will be well reported and documented here on the WTM’s website – so stay tuned! 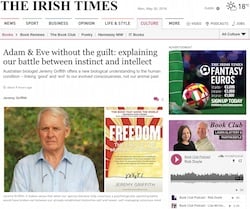 These are some of the window displays for FREEDOM that appeared in the bookstores in Australia, the first one being the display in Dymocks in George Street in Sydney, Australia’s biggest bookstore. Similar promotions of FREEDOM took place throughout the English speaking world: in the USA, Canada, England, Scotland, Wales, Ireland, South Africa and New Zealand.